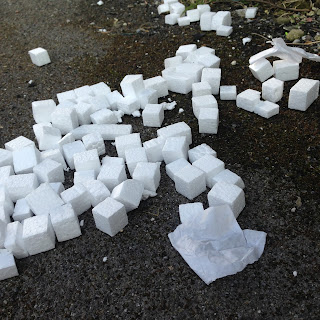 As I was driving up the road in Swanage today, I came across a huge pile of what looked like sugar lumps, but was actually polystyrene. I was in a bit of a hurry, as this weekend is a bit busy. I hesitated: should I stop to pick it up, or should I carry on?

I decided to stop to pick it up. The cubes of polystyrene were strewn across the road, being blown about by the sea-breeze, less than 200 metres away. I knew that collecting the rubbish was the right thing to do. After all, around 44 percent of sea-birds eat plastic, and polystyrene absorbs water so that it sinks to the bottom of the sea, meaning these and other plastic-derived pollutants are prevalent in our oceans. Well done, clever humanity, for polluting our oceans and aquatic life...

What does this mean to humans? Well, the fish eat the plastics, as well as swim around in plastic-polluted water. People eat fish, who are consuming plastic derivatives. Hmmm. I don't really eat much fish, partly for this reason.

What did surprise me (but perhaps shouldn't have), was that nobody offered to stop to help me pick up the hundreds of polystyrene cubes that someone had left in a nearby car park, presumably for the council to collect (if the wind hadn't dropped it all in the sea, that is). Unfortunately someone had partly driven over the box. forcing it to break up into tiny pieces.

One person did stop to watch me begin picking up the pieces, saying, "Oh dear, that is going to take you a long while, isn't it?!" before he continued his walk into town. It wasn't my rubbish! I was just doing  my bit to look after my lovely little spot in the world, which I would like to keep safe for wildlife and for the residents and visitors who enjoy the sights, the sea, the food...the fish...the plastic...?

So, if you want to consume non-plastic items, if you want your local and greater environment to stay beautiful (or even to begin to do so), please pick up your litter. What's to stop you picking up a piece of someone else's, too? We can also reduce the amount of plastic-wrapped items we buy; manufacturers need to reduce this too.

Practice being mindfully in the moment, as you consider how you are helping others, as well as yourself. Be the change you want to see in the world. Don't leave it up to someone else. We all have that responsibility. We all have the opportunity to help each other and the planet.
Thank you!
Posted by The Mindful Nurse at 07:33 No comments:

An article in today's Mail Online today reports that NHS England are to offer financial incentives to NHS trusts in order to improve health and well-being of staff.
The focus on improving staff sickness includes targeting mental health, muscular-skeletal problems and obesity by offering a range of programmes, including mindfulness.
As an NHS nurse I am pleased to see that the well-being of staff is being taken seriously. The NHS is going through a tough period whereby healthcare professionals are feeling the pressure from many different areas. It is taking its toll on all staff who work within clinical and non-clinical roles.
As a tutor of mindfulness, I am positive that introducing this practice to NHS staff could have a great impact on the mental health of staff. I have drafted a mindfulness programme specifically for clinical staff, which combines my knowledge, qualifications and practice as a mindfulness and meditation practitioner, and from my experience and observations as a nurse with 23 years of clinical experience. I am keen to roll it out to NHS trusts to see how it could impact staff well-being, and how it can benefit patients, both indirectly and through teaching mindfulness techniques to patients, as well.

Posted by The Mindful Nurse at 08:39 No comments: