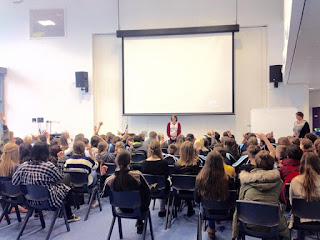 Me, speaking about mindfulness and getting students involved in mindful activities at the school

I've been teaching mindfulness to the year 11's in my local school, in preparation for their exams. Starting in February just before half term, I've been going in once a week to offer optional mindfulness sessions, given scripts and information to key staff for use during the week, and have been seeing students individually. I have also started lunchtime mindfulness to the teaching staff.
I have been auditing the sessions, which have shown improvements in the students. I am looking forward to going through the questionnaires the students and staff regularly fill in, but already there are significant improvements, particularly in anxiety levels - across both groups.
I am very happy to work in primary and secondary schools/colleges. Please get in touch to find out more!

Posted by The Mindful Nurse at 08:08 No comments: 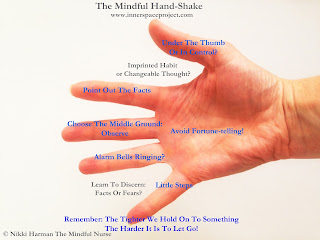 The Mindful Handshake is intended as a greeting to ourselves: it is though we are are shaking our hand to make contact with how we are feeling in a given moment. It can be used at any time, but particularly if fears or anxiety are becoming out of control.
To carry this out, please trace one hand with the index finger of the other, starting with the thumb, moving slowly and mindfully to each digit on the hand, using the following as your guide (remembering that the guide is within):


If you're unable to work through each digit, just pick one to focus on

Thumb: Think, "Am I becoming under the thumb (negative thoughts are beginning to take control of this moment)? Am I starting to become controlled by doubts, worries or fears?"

Index Finger: Point out the facts of the moment. What is true right now? Look for the good points as well (Look for the positives as well as seeing the negatives)

Middle Finger: Sit on the fence: observe what is happening to you, within you and around you

Ring Finger: Listen out for alarm bells - fears, doubts worries creeping in - see them, feel them, thank them, then "ringfence" them. Let these go

Little Finger: One little step at a time. Moment by moment

Palm: Palms up - what we give out, we receive. In other words, if we perceive everything in a negative light, then we are more likely to respond negatively to what's happening in any given moment.
Avoid "crystal-ball gazing" to predict an outcome, which we can do in times when we are anxious or worried about something. It can be easy to let the negative thoughts take control of our perceptions of an event. Be aware of this, so that you can check in with yourself and ask yourself what is happening right in the moment.

Fingerprints: What is in our nature? What are the habits we have learned? What can or cannot be changed?


Important: This is intended as a guide only. If you are experiencing anxiety or fears which feel like they are happening more often than you would normally experience; or if you are feeling that you cannot control these emotions, or yourself, friends or family are becoming concerned about your emotional well-being, please make an appointment with your GP.
Posted by The Mindful Nurse at 10:14 No comments:

Enough Is Enough: knowing when to stop 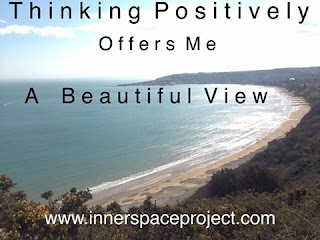 Look at the photo above. Isn't it a beautiful view? I took it last week, during a walk with my two children. We were planning to go to Old Harry, on the Jurassic coast, then head into Studland to catch the bus back home.

We packed a picnic, lots of water (but as it turned out, not enough), a camera, and our sense of adventure. Seemingly intact, we left home and made our way along the beach.

We hadn't even made it to the bottom of the road before my 11 year-old daughter began to complain. Actually, we had had a morning of everything being not quite right in my daughter's world. I had tried to enter into her space, to try to help lift her out of her sense of irritation and negativity. She didn't want to invite me in, though, so she remained where she was, and I hovered around the outside, hoping for a free pass, or at least the offer of connection.

I kept things upbeat: "what a beautiful day it is!" (it is the SATs season: both children are sitting them this term and so I can almost confidently assume I have learned to use the recently-controversial SpAG exclamation mark correctly) I repeated, smiling, nudging and hugging both children. "We are so lucky to live here. Let's enjoy the day". My remarks were met with "I'm hungry and thirsty. When can we stop to eat?" We had only just left home, being fully watered before we set foot out of the door.
We decided to stop after we had walked for half an hour. In that time, we made one toilet stop, a water bottle refill, a rucksack adjustment and two shoe-lace re-ties, scattered with cries of "I'm hungry!", "My feet hurt" (what, already?), "When can we stop?" and "My eyes hurt". I confess that I uttered at least two of these statements. My 7-year-old was buying into the sense of adventure, but my 11 year-old was still in her own space, to which we were neither invited to join nor a party to, but rather the sounding boards for her irritation.

We enjoyed our lunch whilst admiring the view overlooking Swanage bay, on a bench which seemed to have jumped forward a few feet since we had last visited it; actually it was due to cliff erosion which had reduced the distance between the bench and the cliff edge. We had a lovely lunch, the mood lifted and we joked about being "hangry".

After a while we continued on the path up towards the top of the hills. Things were going well until my daughter felt she couldn't continue up the steep steps. I patiently encouraged her to carry on, one step at a time, but after another 10 minutes of complaining, bickering with her brother and getting cross with the steps, I felt it was time to stop. I tried to explain that it was OK to find it difficult...that not everything is easy nor intended to be, that the pain and difficulty we can experience can often end up giving us a completely new view and experience. After another round of sibling conflict I decided that enough was enough, so we turned round and walked back down the hill.

The lessons for me?
I have learnt that sometimes, it's easier to quit whilst I'm ahead. I learnt that the view we had on the midway point of the big scary hill will still be there to re-visit another day. Some days are meant for just climbing half-way up the hill, which is the successful point - that getting to the top of the hill isn't always the indicator of success.

I have learnt that my daughter was able to articulate her feelings because she felt safe and listened to, and because she is strong-willed in her own ways, which I am honour-bound as a parent and as a woman to listen to and respect. She is strong, fit, healthy and persistent: so the fact that she was telling me she couldn't do this walk to the top of the hill and beyond was an indicator of her own strength in admitting to herself and to the world outside her own space that "enough is enough".
I have learnt that my own projection of failure to meet my goal for the day (to get to Old Harry, walk into Studland and catch the bus home) to my children is not helpful for them or for anyone; and I have also learnt that I too felt that "enough is enough" when I caught myself spiralling into negative self-talk and buying into the cortisol-adrenalin mix that was swirling around me in the past week or so prior to this walk.

The view: oh what a beautiful view! The ability to see with clarity, to understand and gain an alternative vista had lifted me out of my head and into a beautiful possibility to turn things around from a negative into a positive.

To know is to understand, but to feel is to reach within the depths of empathy, compassion and sample the richness of experience from a higher perspective.

If we can accept that there is not always a right answer, a right way to do something, that things can go wrong; if we give ourselves permission to make the mistakes, then we can learn something beautiful from them.
Posted by The Mindful Nurse at 06:42 3 comments: